The Chapel was an art gallery, but is not so now. This page is an aside, offering a view of pictures in my care, painted by friends or by a previous self. I am gradually adding to it. 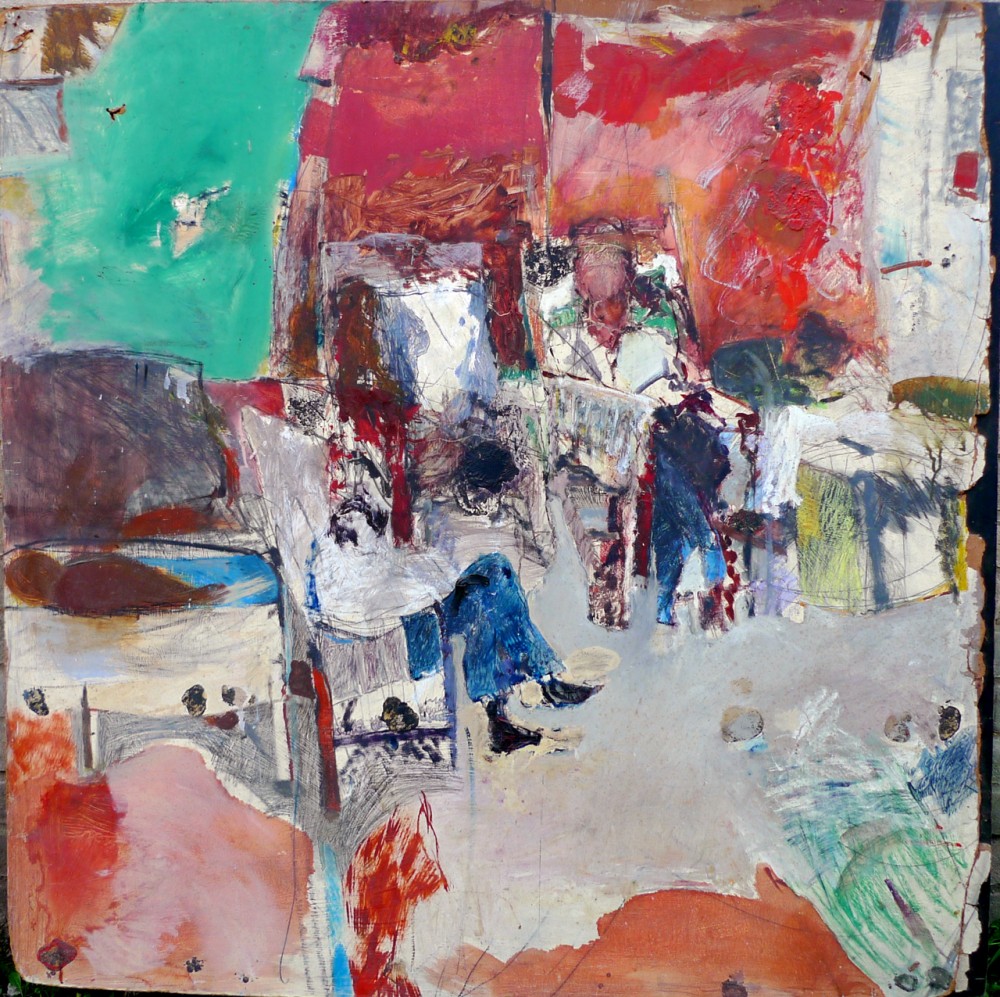 I met Colin when we were both students at the Slade. He was highly idiosyncratic and had a sure touch, and I greatly admired his work. In his paintings of this period, apparitions of a translated reality would emerge through some alchemy of mark-making. In 1963-64 we shared a large bed-sittingroom in Highgate. He often worked from photographs, but here he has recorded some of our occasional visiting friends, variously disposed in armchairs in front of the big red curtains. Everywhere there is the visible process of its making, but for me the tantalising image that emerges has grandeur and intimacy, and is a superb embodiment of the time and place.

I bought it from him when he was still considering doing more to it, but I questioned what I should do about the right-hand edge, where the board had been snapped rather than cut, and was disintegrating. He wanted it left.

Subsequently his work went through a number of complete changes of style, but latterly it seems to have become a part-time activity, painting still lifes in a realist style which didn't interest me.
Having kept in touch with him and his wife Alison for some years, this lapsed; and then the news reached me that he had killed himself.
Alison is now organising an exhibition of his work to run from July to November 2015 at Salford Museum and Art Gallery. 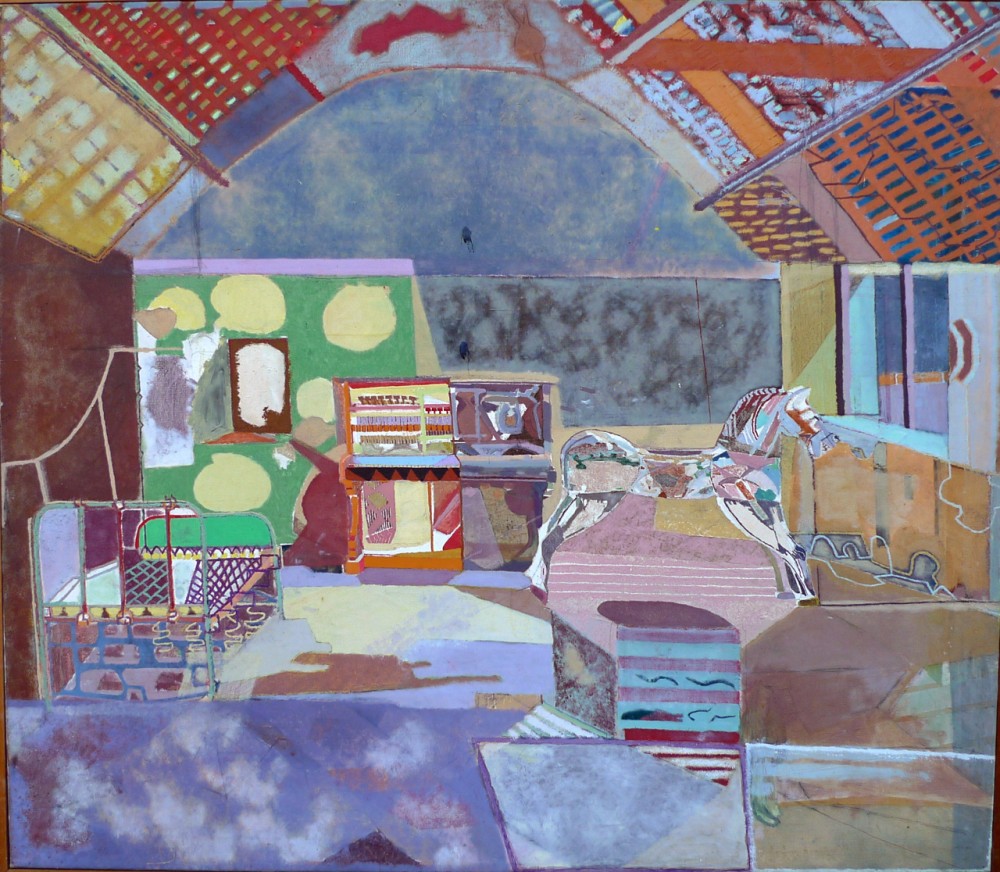 Jane is a painter and a poet, and there was a pellucid quality to her work at this time. In the summer of 1966, she rented a barn in a field near where her parents lived in Cornwall, and constructed a still life there with a bedstead, a piano, and a fairground horse, all of which she had conveyed there for the purpose. In counterpoint to the reality being painstakingly distilled on the canvas, she cut away one side of the actual piano, and added touches of colour to some of the things she was painting. The resulting work brings to some junk in an English barn the formalised stillness and light of a Piero della Francesca, endowing it with a visionary translucence, and making of it her meaning.

I loved both the painting, which led to my getting to know her, and the story of its genesis: and when she took me to see the barn it gave me the idea of finding such a place for myself to live in. She acquiesced to my calling the picture 'Rocking Horse' as it has something of the air of a nursery; and, years later, she gave it to me.

This painting was begun when I was living reclusively and without electricity in an old farmhouse in Devon, and, although there are no direct references to anything I recognise as having been actual, and I was not feeling assailed by alarming presences while I was there, it still evokes that period for me. 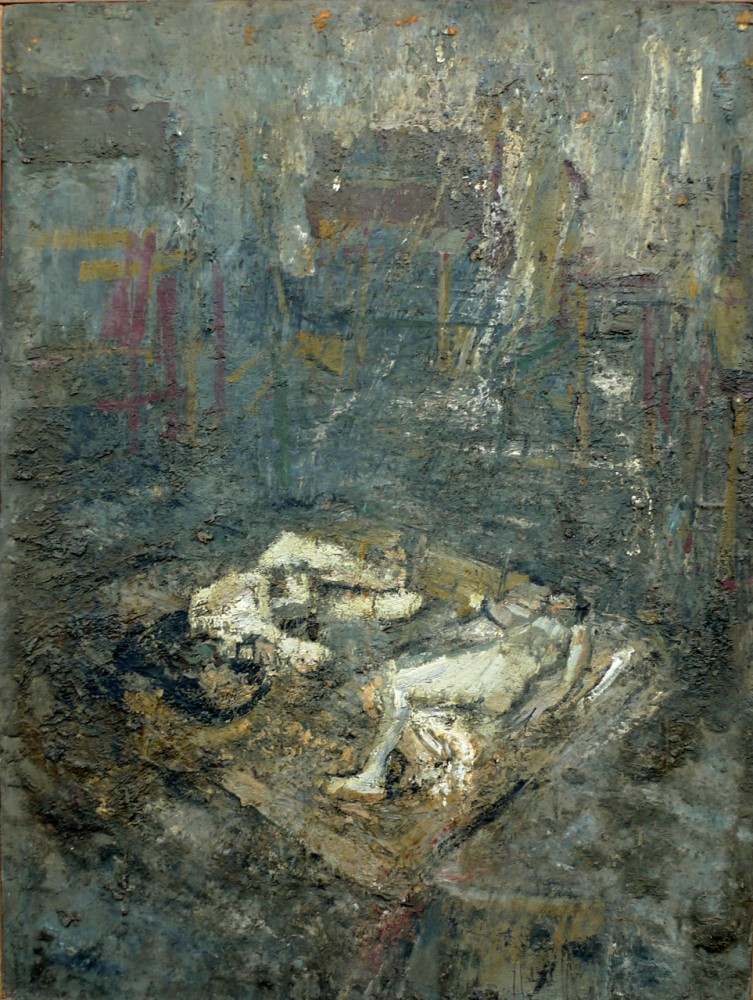 This picture, done in the life room at the Slade, far from being cautiously assembled, seems to be born of the attempt to capture or encompass in its entirety the immediate physical reality confronting the artist, through an heroic battle from within the mass of paint, done from the gut, risking all, testing coordination of eye and hand, and being, ultimately, a challenge to the integrity of the soul.

Mike very generously gave me this painting when he left the Slade. He went on to become Head of Fine Art at Liverpool. 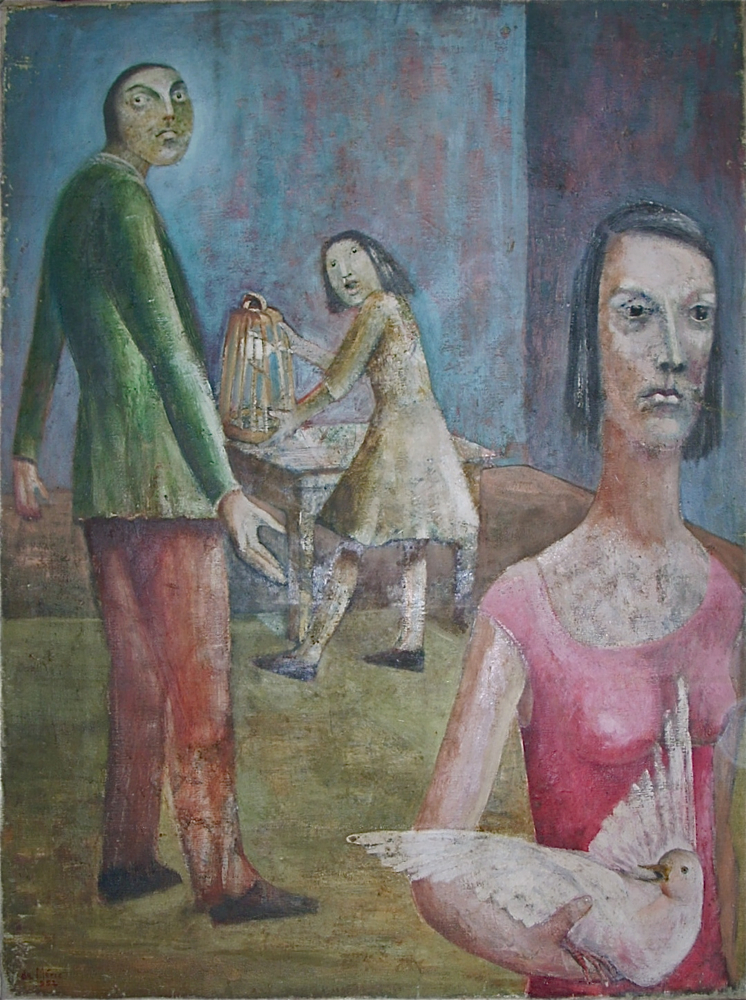 The girl seems dismayed, the man appeals to us helplessly, but the woman is resolved: the dove protests, perhaps at being taken from its mate. The man may even be looking back at the girl, the moonlike face he presents being a mask skewed sideways.

Rosalie told me that at this period she would paint with the tears streaming down her face, and the strongest pictures, such as this, are full of anguish. It is hard not to see the figures as in some way representing herself, her husband (the poet Thomas Blackburn), and their daughter Julia.

I met Rosalie when she moved to Westleton. Helping her stow some of her belongings in a loft, I was very struck by her paintings of this period. She told me that she had kept them hidden away for many years after having been derided for them by her contemporaries at a time when abstraction was in the ascendant. I managed to persuade her to have a retrospective exhibition in the Chapel, showing them alongside her later, very different work - abstracts, and landscapes. She was very nervous about it, but was reassured to find that many people liked them.

That was in 1980. I bought this picture from her daughter, the writer Julia Blackburn, a few years after Rosalie's death; and, more recently, Julia reproduced it as the frontispiece to her autobiographical memoir, 'The Three of Us' (Cape, 2008), in which she gives a vivid account of the emotional landscape from which she, and this work, emerged. 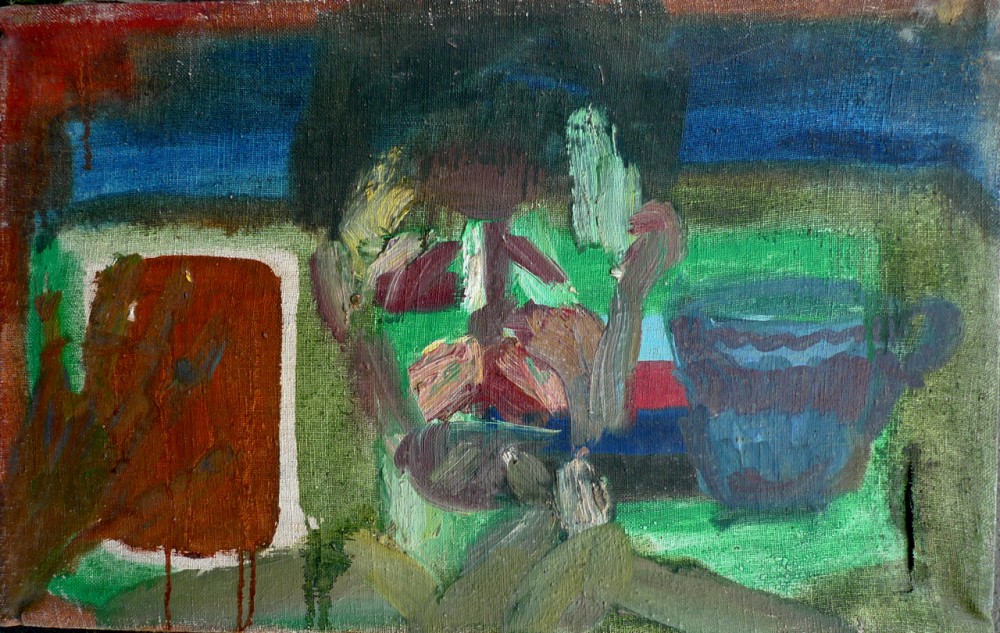 This was painted in my bedsit at Archway, where I lived alone during my first term at the Slade. I was 17, and felt quite isolated.